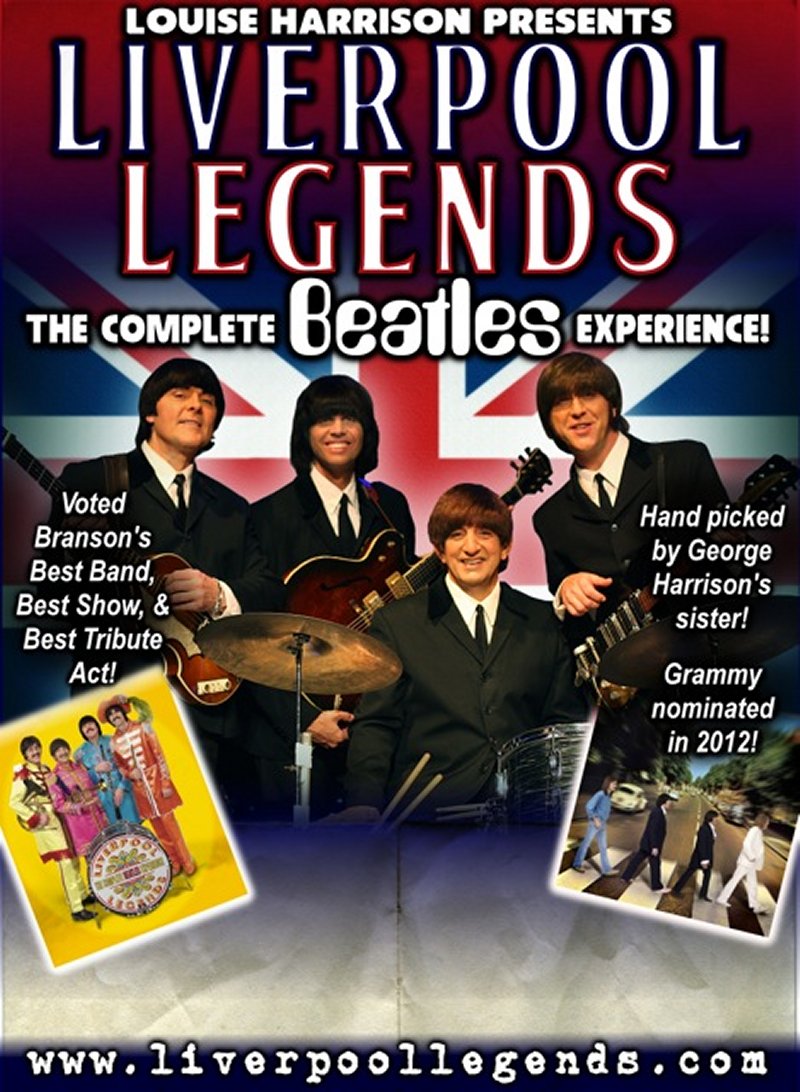 Liverpool Legends Beatles Tribute Band, are four talented musicians and actors who were hand-picked by Louise Harrison – sister of the late George Harrison of The Beatles.

Headlining their own production in Branson since 2006, Liverpool Legends have been voted Best New Show, Best Band and Best Show. Finishing their sixth season, their show once again was spotlighted by receiving the prestigious Visitors’ Choice Award for Best Show in 2009 and also Best Show in 2010. Liverpool Legends received national attention as they re-created The Beatles famed 1966 concert at Busch Stadium in St. Louis.

In 2012 Liverpool Legends along with Louise Harrison were nominated for a Grammy Award for their work on “Fab Fan Memories” – a Beatles Bond. (See an interview from The Red Carpet here) Recently Liverpool Legends were chosen over every other Beatle Tribute band in the world by top television and film producer Jerry Bruckheimer (CSI, Pirates of The Caribbean, National Treasure) to portray the band that changed the course of music and the world forever.

Members of Liverpool Legends have toured the world, playing in historic venues such as Carnegie Hall, The Cavern Club in Liverpool, recording at the famed Abbey Road Studios in London and performing with Denny Laine (co-founder of Wings with Paul McCartney), Pete Best (the original Beatles drummer) and the Boston Pops. They appeared on The Travel Channel’s “Beatlemania Britain” and headlined “International Beatles Week” in Liverpool where 100,000 Beatles fans jammed Victoria Street to hear them in concert.

Liverpool Legends perform songs spanning the entire career of The Beatles and on through the solo years. With precise attention to every musical detail, along with costume changes, vintage instruments and special effects, Liverpool Legends will make you feel like you are watching the real thing! Together, these four lads will bring you “The Complete Beatles Experience.”.