“Beatles at the Ridge,” the award-winning festival that USA Today named as “One of the 10 Best Places in the World to Learn About the Beatles,” will return to Walnut Ridge, Arkansas this September 18 and 19.

Topping the charts of “things to do” that weekend will be the Third Annual Beatles Authors and Artists Symposium – a two-day event featuring Beatles experts from all over the globe. Headlining the weekend’s activities will be two distinguished Beatles authors: Ivor Davis and Jude Southerland Kessler.

In 1964, Ivor Davis was hand-selected to accompany The Beatles on their North American Tour and was the only journalist with the group for all 34 action-packed days. Davis was also the only newspaper writer invited to accompany the Beatles for the amazing “Rock and Roll Summit” when the Beatles finally met Elvis Presley in Los Angeles on 27 August 1965 – 50 years ago this Summer. In 2014, Davis broke his long silence and shared the “rowdy and riotous” memories of that historical summer trek in a fast-paced book entitled The Beatles and Me on Tour.

Davis’s exciting volume, heralded as “a refreshing and entertaining look by a real insider who recorded the intimate happenings of The Beatles” recently won the coveted 2015 Independent Publishers’ Book Award for a Memoir. Over the last year, he has also thrilled Beatles aficionados as Guest Speaker for the Fest for Beatles Fans in New York, Chicago, and Los Angeles.

Having served as a journalist for the London Daily Express and Editor-at-Large for Los Angeles Magazine, Davis has lived all over the world and written about a myriad of subjects: earthquakes, wars, politics, and social upheaval. But nothing, Davis believes, equals his memories of the Summer of 1964, when rock’n’roll changed forever. And he will share those adventures with Beatles fans on Friday night, 18 September 2015 as the kick-off for “Beatles at the Ridge.” 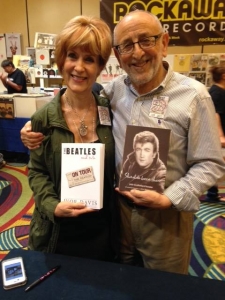 Introducing Ivor Davis and setting the stage for his presentation by taking fans on a magical memory tour of “1964: The 180 Hardest Days of The Beatles Career” will be Jude Southerland Kessler. Kessler, foremost expert on John Lennon and the author of The John Lennon Series – an outlined 9-volume work covering the life of the man who formed The Beatles. Kessler has published the first three books in this series (Shoulda Been There, Shivering Inside, and She Loves You) and is currently researching and writing Vol. 4, Should Have Known Better. Each book is a detailed historical narrative, revealing John’s biography as a story with in-depth and accurate documentation.

Kessler is the host of the weekly “John Lennon Hour” radio show on BlogTalkRadio, and is a regular Guest Speaker at the Fest for Beatle Fans across America. She also writes on Lennon for Rebeat magazine, TheFest.com, and DoYouRemember.com. In 2014, Kessler was a featured presenter at the “International Beatles Symposium” at Penn State, Altoona and the University of Pennsylvania Beatles Symposium as well.

On Friday, 18 September, Davis and Kessler will open the Ridge’s two-day celebration with an hour-long, multi-media journey back to the events of 1964 that led John, Paul, George, and Ringo to Walnut Ridge, Arkansas.