Sonny Burgess and Stan Perkins cut the ribbon on Saturday afternoon to open the Guitar Walk at Cavenaugh Park. 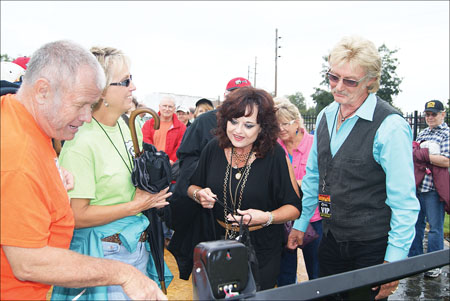 Stan Perkins (from right), along with his wife, Connie, visit with Jackie Snapp of Walnut Ridge and Tommy Spencer of Paragould after unveiling the plaque that honors his father, Carl Perkins. Many were on hand for the ribbon-cutting and grand opening of the Guitar Walk at Cavenaugh Park on Saturday afternoon.
TD Photo ~ Gretchen Hunt

Located next to the Iron Mountain Depot, along Highway 67 B, which has been designated as the Rock ‘N’ Roll Highway, the attraction pays homage to legends who played along the highway in the 1950s and ’60s.

Burgess, who is one of the musicians honored on the walk, also unveiled his plaque with assistance from his band, The Legendary Pacers.

Perkins and his wife, Connie, unveiled the plaque that honors his dad, Carl Perkins. Both were noticeably moved as they looked over the photos depicted and listened to the audio that had been recorded.

Other special guests on hand for the reveal were family members of the late Billy Lee Riley, who is also honored on the walk. His widow, Joyce Riley, along with her daughter and granddaughter, Angela Johns and Lauryn, unveiled his plaque.

H.T. Moore of Paragould, who did all the legal work for the project, and architect Jim Eubanks of Little Rock, were also a part of the grand opening. Both provided their services at no charge and have also made financial contributions to the project.

Boyce, who was part of the original effort to have the highway designated as the Rock ‘N’ Roll Highway, gave high praise to former State Rep. J.R. Rogers of Walnut Ridge.

“Without J.R. none of this would have happened,” Boyce said. “He single-handedly wrote the legislation and got it through the House and the Senate to have the highway designated.”

Cooper said the Tourism Committee came up with a couple of really innovative ideas and then went to work to make them happen.

“With Beatles Park last year and Guitar Walk at Cavenaugh Park this year, the committee has done remarkable work,” he said.

He said one of the most rewarding parts of all of this has been seeing the community get behind the tourism efforts.

“Folks just seemed to catch the vision, and their support and generosity made it possible,” he said. “Their excitement has been contagious, and I sincerely hope it keeps building.”

At each station, visitors will find photos and memorabilia related to each artist, as well as have the opportunity to listen to an audio tour narrated by Doyle and featuring anecdotes from Burgess.

“We decided to ask Sonny to give us memories of the Rock ‘N’ Roll Highway for the audio tour,” Doyle said. “I recorded about three hours of interviews with Sonny, as he reminisced about Elvis, Orbison, Cash, Twitty (Harold Jenkins as he referred to him) – he knew them all.”

Doyle said the hardest part was selecting those “little gems” of audio to use as soundbites.

“It required a lot of audio editing and tightening up,” Doyle said. “Sometimes I had to write and record my own lead-in to one of his bites to give it context.”

Doyle said the technology used at the walk is cutting-edge.

“We have a classy exhibit that entertains while it educates – an outdoor museum that recognizes our musical heritage on the Rock ‘N’ Roll Highway,” he said.

“The Guitar Walk is a world-class attraction, designed to entertain and educate visitors,” Snapp said. “When you combine its appeal with Beatles Park, I think area residents will be shocked at what the future holds in the way of visitors to our area.”