City tunes up for Beatles bash

City tunes up for Beatles bash

In the year since Walnut Ridge hosted a music festival to commemorate a brief visit by The Beatles in 1964, city leaders have embraced the idea of highlighting the area’s musical heritage.

Aldermen voted last fall to change the name of a downtown street to Abbey Road to honor the London street made famous by The Beatles’ album of the same name. Workers also installed a large aluminum sculpture of the album’s cover in a downtown park.

Now, as organizers prepare for the second annual Beatles at the Ridge festival in Walnut Ridge on Sept. 15, workers are scurrying to complete a guitar-shaped plaza.

The 100-foot by 40-foot plaza features historical highlights of nine rock ’n’ roll musicians who traveled U.S. 67 through Walnut Ridge and played at venues in the 1950s.

Charles Snapp, a Walnut Ridge businessman who has led the effort to promote the area’s musical roots, said the plaza will be unveiled in time for this year’s Beatles at the Ridge event. 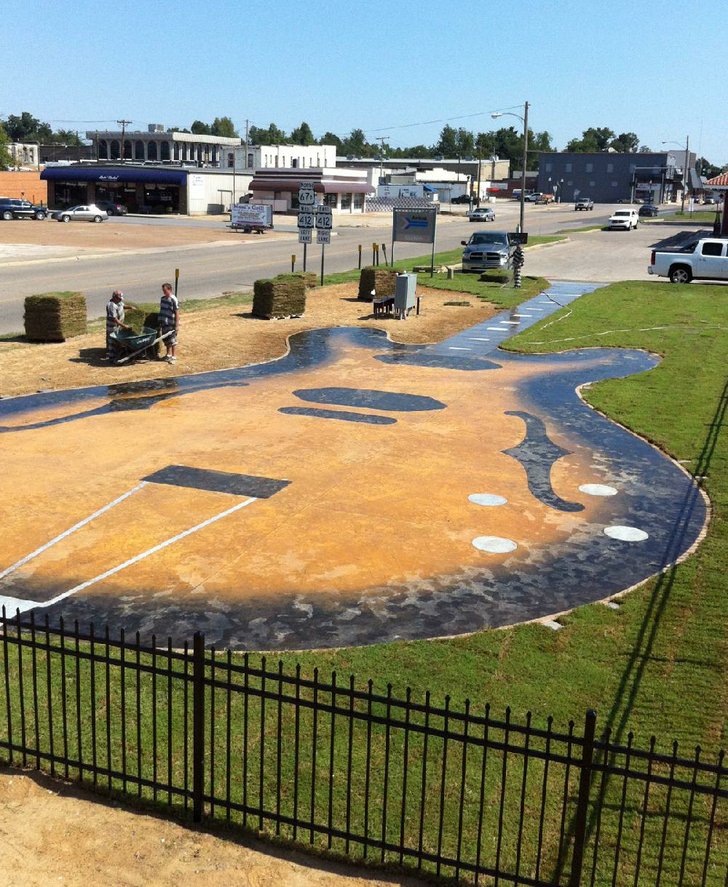 Photo by CHARLES SNAPP / Special to the Democrat-Gazette Inmates lay sod recently along a new Guitar Walk display in Walnut Ridge that highlights musicians who once played in venues along U.S. 67 in northeastern Arkansas.

“We’re working on it now,” Snapp said. “We just laid sod, and we’ve got to put up the plaques. We’ve still got a ways to go, but it’ll be ready.”

The guitar plaza is modeled after the Epiphone guitars used by Beatles John Lennon and George Harrison.

Last year, the Lawrence County town first commemorated The Beatles’ stopover on Sept. 18, 1964, with a festival and concert by featuring a Beatles’ tribute group along with rockabilly performers.

The Beatles landed at the nearby Walnut Ridge airport to switch airplanes to fly to a small ranch in southern Missouri for a respite while touring.

Two days later, the group returned to the airport, and after briefly acknowledging the 300 fans who waited by the airplane for them, The Beatles flew to New York.

“The Beatles were world famous when they landed in Walnut Ridge,” said Mayor Don House.

“They only stopped shortly, but the bigger picture is that they were influenced by the musicians who were here regularly. Roy Orbison, Elvis Presley, Sonny Burgess all developed themselves as entertainers up and down this highway.

“They became international entertainers, but they could look back and say their musical heritage began here,” House said. “This area played a major part in helping develop these artists.”

State legislators named a section of U.S. 67 from Jackson County to Clay County as the “Rock ’N’ Roll Highway” in 2009.

House said he envisions visitors continuing to flock to Walnut Ridge after the Beatles on the Ridge event to look at the guitar plaza and The Beatlespark.

“We’re a small town doing a salute to musical heritage,” he said. “I think people will make the effort to come here and see us.”

Snapp said he promoted Beatles at the Ridge at a Beatles festival in Chicago earlier this year, and he has received commitments from vendors for this year’s event from as far away as Denver. He’s expecting 10,000 people to attend the show.

“This will be a huge economic boost to our town,” he said.

The event will begin at 10 a.m. on Sept. 15 with music at the Beatles park downtown.

At 4 p.m., the Liverpool Legends, a tribute band managed by George Harrison’s sister, Louise Harrison, will play beside the Lawrence County Chamber of Commerce building on U.S. 67.

Stan Perkins, son of former rockabilly musician Carl Perkins, will play at 8 p.m. and will tell stories about his father and The Beatles.

The show’s lineup can be found at website www.BeatlesAtTheRidge.com.

“Ultimately,” Snapp said, “we want to have a country-festival feel at a full-blown musical event.”