A huge collection of Beatles photographs and images is set for display at the Beatles at the Ridge music festival Sept. 19 and 20. The Argenta Collection will be unveiled at the annual festival in downtown Walnut Ridge. 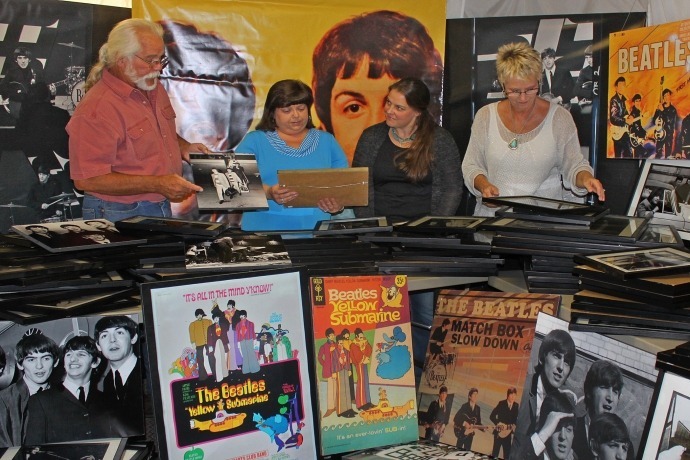 Charles Snapp (from left), Lorra Whitmire, Ashley Burris and Jackie Snapp sort through the Beatles photos and images in the Argenta Collection. The collection contains over 200 large format photos, including many rarely seen before

“The Argenta Collection contains 229 large format photos,” Charles Snapp, festival chairman, said. “These go back to the days when photographs were taken by news reporters with film cameras, and many photos were kept in archives and never published.”

Retro Images originally composed the collection for the Argenta Arts Foundation in North Little Rock. After being displayed there, the foundation donated the entire collection to Downtown Walnut Ridge, Inc.

“This is likely the largest such collection in the world, and that is no hype. The collection really is that massive,” said Snapp. “This is a tremendous gift to Downtown Walnut Ridge, and we plan to make the most of it.”

The entire collection will be on display during Beatles at the Ridge at The Studio, a new event center opening at the corner of West Main Street and Abbey Road in Walnut Ridge.

This yearâ€™s Beatles at the Ridge Festival commemorates the 50th anniversary of the Fab Four’s stop at Walnut Ridge Airport in September of 1964.

After the festival, the Argenta Collection will be on rotating display at the Lawrence County Library. Some 60 to 70 photos will be displayed at a time at the library, which is located at Walnut and Second streets in Walnut Ridge.