Beatles at the Ridge wins honors

Beatles at the Ridge wins honors

The Beatles at the Ridge festival, which has been held in downtown Walnut Ridge for two years, was awarded Best New Festival or Event honors at the 2012 ALFiE Awards. 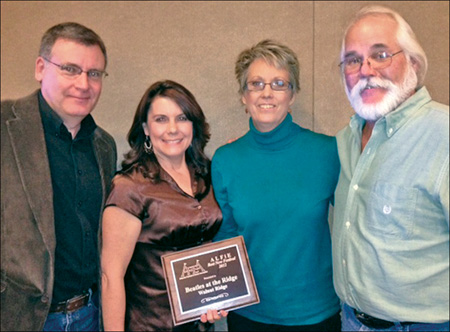 Jon (from left) and Lesa Walter and Jackie and Charles Snapp accepted the Best New Festival award for the Beatles at the Ridge Festival during the Arkansas Festivals and Events Association’s annual conference over the weekend in North Little Rock.
Photo courtesy of reNEW East Arkansas

Events within their first five years are eligible for the Best New Festival or Event honor. Judging is based on growth, uniqueness and community contribution.

“To be recognized by the state festival association for the best new festival is an honor for all who have donated countless hours,” Charles Snapp, Lawrence County Tourism Committee member, said. “It is an honor for those who have supported Beatles at the Ridge, as well as those who worked with the Iron Mountain Festival in years past.”

In addition, the Beatles at the Ridge website, which was developed by Jon and Lesa Walter of Walnut Ridge, won silver honors in the event website category.

“To think Jon and Lesa would develop and maintain BeatlesattheRidge.com, for nothing more than the satisfaction of supporting their community, is a perfect example of what this event is really about,” he said. “Then, when you think about other festivals the website competed against, like Toad Suck Daze or The Wings Over the Prairie Festival, the overall quality of our website is obvious.”

Planning is already underway for the 2013 Beatles at the Ridge festival, which is scheduled for Sept. 21.