Award winning filmmaker, recording artist, and author Seth Swirsky has been selected as the Featured Artist for the “Authors and Artists Symposium” at the Beatles at the Ridge Music Festival in Walnut Ridge, Arkansas on September 18 and 19, 2015.

Swirsky, who has written songs for Elton John, Celine Dion, Smokey Robinson, Olivia Newton-John, and Michael MacDonald was primarily a music artist until 2004. He had hit songs such as Taylor Dayne’s “Tell It to My Heart” and “Prove Your Love” which soared to #1 on the international pop charts.

Then in 2004, Swirsky was invited to perform at the Cavern Club in Liverpool, England where The Beatles had spent their formative years, and he was inspired to tell a new side of The Beatles’ story. Over the next six years, he set off on many long journeys across the United States and England, interviewing people who had met The Beatles and knew them first-hand. Swirsky focused his research on people who had never before told their Beatles Stories. And that became the name of his in-depth film: “Beatles Stories.” 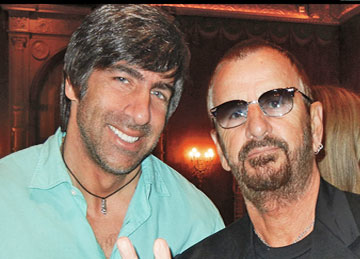 Also, Swirsky talked with noted musicians such as Graham Nash, Art Garfunkel, Davy Jones, Jackie DeShannon, and Smokey Robinson – all of whom had special “Beatles Stories” to share. Over 80 interviews were stitched together seamlessly to make this outstanding film about The Beatles and their influence on people from every walk of life.

In 2012, Swirsky’s artistic and informative film was released at Los Angeles’ famed Egyptian Theater. Immediately after, it was premiered at the Grammy Museum to a sold-out audience. And in the years since, “Beatles Stories” has become an Amazon.com Best Seller with a flawless 5-star review from Rolling Stone magazine.

As Featured Artist at Beatles at the Ridge, Swirsky will talk about his film-making trek on Friday night, September 18, and then he will show the film to fest-goers, free of charge. Afterwards, Swirsky will answer questions and sign/sell his video. He will be accompanied by Ivor Davis who toured with The Beatles in 1964 and John Lennon expert, Jude Southerland Kessler, author of The John Lennon Series.