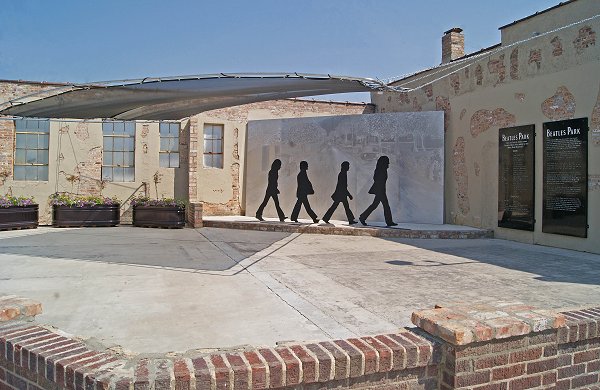 The Beatles sculpture located at Beatles Park is dubbed The British Invasion of the Rock n’ Roll Highway. The sculpture pays tribute to a visit from the legendary rock band to Walnut Ridge on September 18, 1964. The Beatles landed in a small plane at the Walnut Ridge Airport on their way to a weekend vacation to a dude ranch in southern Missouri. It is one of two tourist attractions being built by the tourism committee of the Lawrence County Chamber of Commerce.

The Beatles Abbey Road Sculpture is a 10 feet by 20 feet, 200 square foot sculpture of the iconic Abbey Road Album that was released by the Beatles in 1969, and was their last recorded album before the group dissolved. The sculpture, created by Danny West of Walnut Ridge, is a tribute to commemorate the Beatles historic stopover in Walnut Ridge Airport in September of 1964. Although the stop was a brief “In and Out” over a two day period, many Walnut Ridge teens caught a glimpse of the Fab Four before their Sunday morning departure, many of the kids snuck out of Church services to attend. The visit was the only time the Beatles were in Arkansas, and the sculpture is on permanent display at 110 Abbey Road, (formerly 110 southwest 2nd street) in Beatles Park.

The sculpture features life-size silhouettes of The Beatles made from heavy carbon steel plate, and the backdrop of Abbey Road is hand ground on 1/4″ thick aircraft aluminum plates. The entire street scene is featured, along with more than 30 hidden references to Beatles song titles, and album names. There are also a few hidden surprises that were added in by the artist, that will are unique to our city, and tie the whole sculpture to our town. As lighting changes throughout the day, the hidden details in the sculpture reveal themselves to the observer, and at night, under the powerful lighting, the scene takes on a surreal quality, and more secrets can be seen.

The sculpture has been featured in newspapers and publications around the world, including The Wall Street Journal, UK’s The Daily Mail, The Australian, The Huffington Post, and many others. We invite you to come see our newest attraction, and have your picture made walking with The Beatles on Abbey Road. 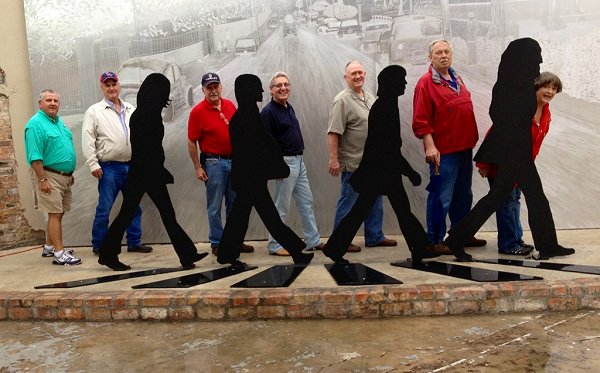